Rubbish - our streets are a mess! Time for a clean-up!

Rubbish - its all round us and seems to be getting worse! 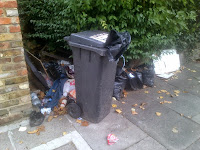 Every day, there seems to be a new pile of litter by a lamp post or a tree or just by someone's garden wall. And that doesn't take into account the piles of stuff round the local recycling centres - the horror on Minster Road seems to be a semi-permanent feature of our landscape and from time to time the West End Green and Fortune Green road "Mini-centres" are not much better. What is it about this time of year that makes people throw out furniture?
A sort of Spring cleaning in the autumn or lots of people taking up
new DIY courses? 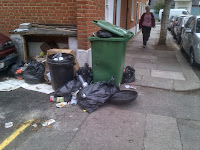 Also, since the changes to refuse/recycling came in in the July, our
councillors complaints bag has been full to bursting - rather like uncollected rubbish! People say they have only had half their bins emptied, or the food refuse bin has been left to fester for another week or that the rubbish is strewn all over the road during and after the weekly collection. And that's before complaints about commercial waste outside shops and dog dirt! Then you ask us why the Council doesn't seem to care about our dirty streets 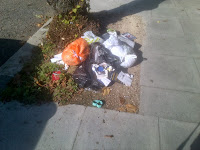 There are probably no easy answers - maybe the refuse people don't care or they're trying to do too much in too short a time, maybe they aren't properly supervised either by their own bosses or by officers in Camden who are supposed to monitor the contract. Also it seems lots of people just don't care where they leave their rubbish - smelly old mattresses, broken chairs etc. Whatever the reasons - our streets are definitely a mess!
Also, it's not very easy to make a complaint via Camden's system, but there's possible good news in sight. The Council has agreed to look at a simple way of reporting problems based on "Love Clean London" (an easy to use website) which means you just send in a photo (that's if you have the technology - if not you'll have to stick with the Camden call centre with all its difficulties!)

The other good news is that Camden's Street Environment Services have been re-organised, recruited new staff and hope that when they are all in place, things will improve and our streets will get to look a bit cleaner. 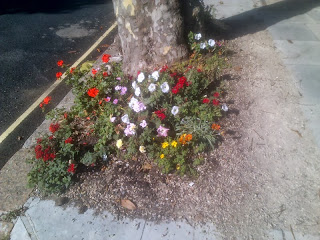 Meanwhile - over in Fordwych Road - some enthusiasts have planted flowers instead of rubbish round their trees!  Thank you!

Campaign for a clean-up! Make our street environment better and our area somewhere pleasant to live!
Posted by Flick Rea at 18:40 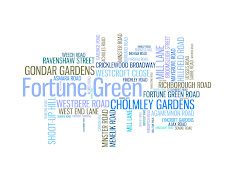 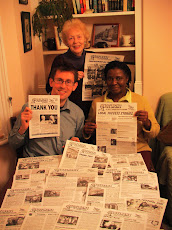